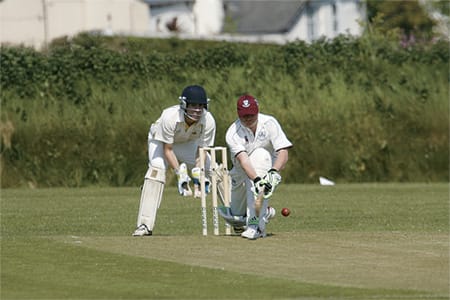 Neil Peach tickles a delivery down the leg side ()

ON a fantastically sunny day at the Butts, Kingsbridge hoped their form would improve with the weather. On being asked to bat they started steadily until Will Dorey fell to a full toss with the score on 18. James Ellis joined James Westlake and both looked in good form until Ellis flashed at a wide one only to be caught behind, 47 for two. Tony Treeby joined Westlake before two wickets fell with Kings on 77. The bowling wasn't particularly special and so Treeby was scoring runs. Things were to get worse when another wicket fell on 105 and then three in the 120s. Treeby was eighth out for 41 with the score on 125. What had looked like a reasonable position now looked dire. Neal Peach joined James Rosewarne and together the pair repaired some of the damage, putting on 39 wicket for the ninth before Rosewarne was caught for 20 with six overs to go. The final wicket fell on 168, leaving Peach 16 not out. With the pitch being slow, a good bowling performance coupled with good fielding was a must. Peach and Rosewarne did some early damage, reducing Chagford to 31 for three with Peach removing the dangerous overseas player Marais for a duck. This became 91 for five, but perhaps the turning point was a big snick by Penberthy not being given by the umpire. He carried his bat for 63. He was joined by Isca hockey player Wright, who smashed 66 not out rapidly. Both were aided by some dropped catches as Chagford won by five wickets.