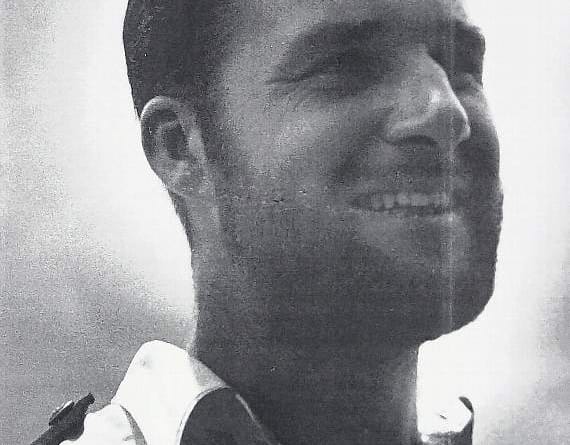 The 75th anniversary of a heroic incident involving a former Dartmouth naval cadet who played a major role in influencing the outcome of the Second World War took place this week.

Tony Fasson lost his life on October 30, in 1942 after retrieving vital Enigma codebooks from a sinking German submarine at the cost of his own life, at the age of 29.

The capture of this material resulted in the Allies winning the Battle of the Atlantic, a victory that Churchill described as crucial to the eventual defeat of the Nazis.

After graduating from Britannia Royal Naval College, Fasson became an officer on board a British Destroyer. Seventy-five years ago he was on board one of the four destroyers sent from Port Said in Eygpt called HMS Petard to investigate a U-boat sighting off Haifa in Palestine.

After serious damage involving a total of 150 depth charges, the U-559 was finally forced to surface by the Petard and as the Germans abandoned their vessel in terror, Fasson alongside other crew members prepared to enter the dangerous waters.

Colleagues described how Fasson accompanied by a 22-year old Able Seaman, Colin Grazier, stripped naked and swam past the German survivors in the water to reach the sinking U-boat.

Additionally, a whaler had also been launched to take a boarding party across to the submarine including a 16 year old boy, Tommy Brown who played a key role in the action.

As the water rose, Fasson and Graier acted quickly, smashing open locked cabinets with a machine gun and opening draws containing code books which were passed to Tommy Brown who handed them over to his crew mates on the whaler.

Unfortunately, just as the brave men started to get out of the submarine there was a sudden rush of water which sank the submarine, taking Grazier and Fasson down with it. However, Tommy miraculously managed to survive.

A radio operator on HMS Petard, Reg Crang who also had roots in Devon wrote a diary that recorded the event, but it was only when he was an old man that he discovered how the mission had played such a large role in ending the war. In the diary, Crang recorded their tragic deaths, describing Fasson as, “a real man’s man, already a legend of the ship,” who, “was admired by everyone.”

Most importantly, the risk these men took, helped the brilliant code breakers at Bletchley Park to crack the Nazis’ four-rotor naval Enigma code that was designed to prevent the enemy from reading U-boat road traffic.

Fasson and Grazier were awarded the George Cross and Tommy received the George Medal, however their families could not be told of the huge importance of the mission that had ended their lives.

The importance of these actions and the heroes themselves has been honoured by a former newspaper editor, Phil Shanahan, who led a successful campaign to celebrate the role these men played in the outcome of the war.

This culminated in the unveiling of a sculpture in Tamworth featuring three anchors, one for each of the men as well as presenting Prince Charles and the Duchess of Cornwall with a signed copy of his book at Bletchley Park.

The Real Enigma Heroes, which was originally published in 2008, charts the First Lieutenant Tony Fasson’s extraordinary actions and the campaign to bring him to public attention. For the anniversary, the book is being released in electronic form for the first time.

For research, Shanahan was awarded the Freedom of Bletchley Park and he officially opened Hut 8 to the public, where Alan Turing and his team finally broke the German naval Enigma code.

During the campaign Shanahan had a much publicised spat with Jonathan Mostow, the director of the Hollywood film U-571, which made out the Enigma heroes were fictional American sailors. Their exchange of letters made headlines in both the UK and the USA. It was this that inspired the title of his book