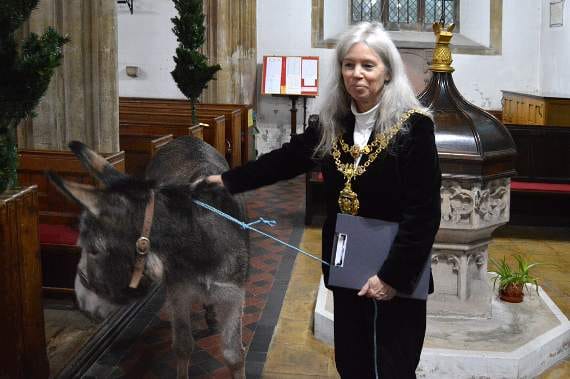 Jacqi Hodgson with Cariad at St Mary’s Church, Totnes, for a pets service in 2014 ()

Hodgson, of Argyle Terrace, Totnes, who has seats on Devon County, South Hams District and Totnes Town councils, is being prosecuted by the RSPCA for breaching the 2006 Animal Welfare Act.

The 62-year-old former mayor of Totnes and constituency Green Party candidate in the 2017 general election denied the charge when it was brought before magistrates in Newton Abbot on Monday. Richard Hodgson, 69, of the same addresss also denied the same charge.

The charge reads: “Between June 1, 2017, and Septmeber 1, 2017, at Totnes... being the person responsible for an animal, namely a grey female donkey known as Cariad, a failure to act, namely failing to provide appropriate remedial care in respect of severe laminitic changes affecting the animal’s front hooves, which resulted in the animal experiencing pain, by yourself caused that animal to suffer, you permitted that to happen or failed to take such steps as were reasonable in all the circumstances to prevent that happening, and that suffering was unnecessary.”

Keyham shootings: Family tribute a year on from tragic incident

Laminitis is a crippling condition which can be fatal in severe cases.

The RSPCA’s website says the disease is caused by too much food and lush grass in the summer months.

It adds: “This is a painful condition which affects the hooves and needs immediate treatment and provision of painkillers from a veterinary surgeon.”

For animals prone to laminitis it is necessary to restrict the amount of food that is made available to them.

The case was adjourned to Wednes­day, March 7, when it is expected a trial date will be set.