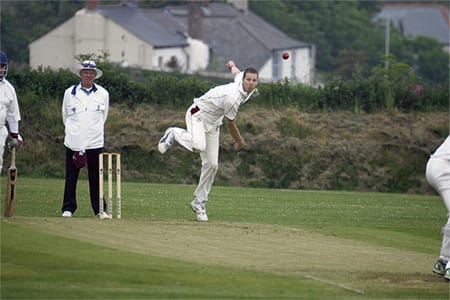 KINGSBRIDGE entertained Shaldon looking for a change in fortunes. Shaldon batted first and Peach quickly removed an opener for a duck. Runs were coming freely as Shaldon batted aggressively and they quickly rattled along to 57. Three wickets for three runs saw Shaldon reduced to 59 for four. Peach had taken three wickets with the pitch providing him some help, however here fortunes started to change. McKenna had a little luck. Peach finished his spell with three for 32 from his nine overs and McKenna continued to punish any loose bowling and quickly moved to 50 and then 100 as the score rattled along. DeSilva was unlucky not to see him stumped as he increased the run rate. Kings chipped in with the odd wicket as the other batters just managed double figures each. James Westlake eventually removed him for 181 from 116 balls as Shaldon declared on 292 for nine. To stand any chance a good start was a must, seven for three put an end to this. James Westlake (57) and James Rosewarne (38) recovered the position putting on over 100 for the fourth wicket, but two wickets fell on 111 making it 111 for five. Westlake was batting well until a fantastic catch by McKenna at short cover removed him. James (27) and Bhanu DeSilva (25) looked as though Kings would get maximum batting points, but three wickets falling for six runs at the end saw King all out for 190. The match ball was kindly sponsored by Palladium Builders. Kingsbridge'a second XI travelled to Yelverton Bohemians and picked up seven points as they were defeated by 69 runs. Yelverton made 250-6 off their allotted overs before bowling Kings out for 181, Browne making Kings' highest score with a determined 69 and Hardy chipping in with 32. Tomorrow sees Kings' first XI, currently bottom of the table, travel to South Devon looking to kickstart their revival while the second team welcome the same opponents.