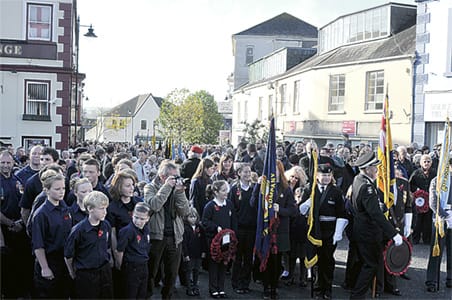 The sort of Remembrance Day crowds that have sparked safety fears ()

IVYBRIDGE COUNCIL has been asked to consider moving the town's war memorials to a new location.

The chairman of the Ivybridge Royal British Legion branch and the founder of a local charity have asked the council to think about removing the memorial, at the top of Fore Street – and potentially the American memorial located close by – to an area of land at the entrance to Erme Court car park.

David Davis, chairman of the RBL Ivybridge branch, and David Snelling, founder of the Operation Henry Trust, which helps sufferers of pancreatic cancer, approached the council at Monday night's meeting.

This followed a letter which Mr Snelling wrote to his ward councillor Elizabeth Silsbury, about his views. He read the majority of it out to the councillors at the meeting.

A38 has reopened but traffic slow

Nature and Climate: a guide for the confused

The letter said: 'Following reports from the local constabulary it was estimated that over 2,500 people attended last year's Remembrance Day parade and meeting.

'I am writing to you in order to establish what steps are being considered by the appropriate committee to prevent what may become an unmitigated disaster this year.'

Mr Snelling pointed out that over 3,000 are expected to attend the town's Remembrance parade in

2012, and he felt grave concern over issues relating to health and safety, which could result in 'perhaps serious injury or death'.

Other concerns Mr Snelling mentioned in the letter over the current position of the war memorial included uncontrolled background noise emanating from the river, especially when in full spate, increasing costs in the provision of the constabulary involvement, the inconvenience of road closures and the frustration of participants, unable to see and appreciate the activities taking place.

Mr Snelling also mentioned in his letter that funding may be available through the Heritage Lottery Fund supported by the War Memorials Trust and the Local Government Association.

He said: 'Would it not be in order to bring to the notice of the Town Council that an area of land to the left of the entrance to Erme Court car park being currently unused for any community benefit could be put to better use and to propose that the town's war memorials be removed and relocated to this site.'

Mr Snelling described the potential benefits of a relocation as no need for road closures, other than for the parade up Fore Street and possibly down Costly Street to enter the car park, ample space for participants to be involved with activities, reduced exposure to accidents caused by overcrowding, a substantial site for both war memorials appreciated not only by the community but also by visitors travelling south towards the A38 and a suitable focal point to show how the Ivybridge community served in world wide conflicts and resulting in an area which could presuppose the site of a Town Square.'

But Cllr Melvyn Vincent was strongly against any plans to move the war memorials.

He said: 'I am born and bred in Ivybridge and the memorial was a part of my youth. I would hate to think it would be moved.'

Another member of the public at the meeting said: 'The memorials are there for a reason.'

Chairman of the Ivybridge Royal British Legion branch David Davis agreed with Mr Snelling's letter saying that he had raised the idea of moving the war memorials two or three years ago but it was turned down by the council.

Mr Davis said: 'Every year people tell me that they couldn't see or couldn't hear at the Remembrance ser-vices.

Christopher Red-wood, an ex-serviceman who was parade marshall last year, also spoke at the meeting. He said he appreciated Cllr Vincent's comments that it would be incorrect to move the memorial, saying it would be sacrilege, but he did say that when he saw the amount of people at last year's parade he was concerned at where they would all go, as it appeared very congested.

Town clerk Lesley Hughes informed the meeting that every precaution was taken to ensure the safety of children at the event.

Town mayor Trevor Parsons, whose chosen charity is the RBL Ivybridge branch said there would be issues based on the fact that Erme Court is a private car park but said he would accept proposals from the RBL Ivybridge and promised the town council would address these.