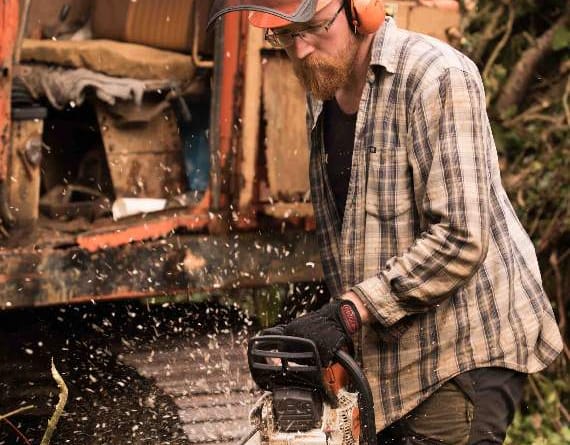 Copyright: Becky Strong. Doug at work in the woods

A FAMILY trying to nurture an area of ancient Dartmoor woodland back to life say they are being forced out by the national park’s refusal to support the small-scale business necessary to sustain the project.

Doug King-Smith bought the Hillyfield in 2009, after volunteering and falling in love with the 45 acres of woodland and pasture just south of Harbourneford.

Working with volunteers who shared his dream of rejuvenating the neglected woods and managing them sustainably into the future, Doug devoted himself to caring for the land. In 2011, following their marriage his wife Claire joined him, and the team was further bolstered by two young children.

But just after the wedding came the news that Phytophthora Ramorum – sudden oak death – had been found in some of the trees. Doug and his helpers were forced to begin felling five acres of conifer planted on the site of ancient woodland, doing in three years what they had planned to do in 30.

Ever since, they have laboured to cut down all the larch throughout 22 acres of woodland and replant with mixed broadleaf that allows much greater biodiversity.

Now, says Doug, the future of the project is in doubt thanks to the intransigence of Dartmoor National Park Authority’s planners, which has ’forced’ him into fighting an expensive appeal. A campaign has now been launched to raise the £35,000 necessary for the legal battle.

In order to make The Hillyfield financially sustainable and pay for the accelerated programme of felling and replanting, Doug and his team sell seasoned firewood and timber. To dry properly and within a reasonable time this needs to be stored undercover, but DNPA have refused permission for permanent sheds to be built for drying and machinery storage under permitted development – meaning full planning permission must be sought.

And when Doug appealed the decision, he says he was immediately served with enforcement notices ordering the removal of all structures at The Hillyfield – down to the tiny sheds housing the land’s compost toilets. His appeal now has to encompass the enforcement notices as well.

Doug said: ’For a woodland not to be able to sell dried timber is really the death knell. Dartmoor National Park is not prepared to support the business side of it.

’We’ve had planning enforcement visits every year for the last six years except one, and the officers have never had a problem with what is here. We’re just trying to get support from the park to meet their own policy aims.’

In a strange twist, Doug is himself working to bring together a team of experts to support the national park in manging its woodlands. And in another twist, his woodland advisor is Rupert Lane, who for 29 years was a senior woodland officer at DNPA.

In a feature aired on BBC Radio Devon on The Hillyfield’s predicament, Rupert explained why a timber drying shed is so crucial to the business model.

He said: ’It’s very difficult to make a woodland pay for itself these days, and the key is to add value to your produce on site, so you’re taking away a product rather than timber in the round. To do that, you really need an area where you can store your material, so here it’s kind of essential to fulfilling the whole process of the woodland plan, and helping to bring this woodland back into a good, healthy, strong biodiversity.’

Rupert’s views are echoed by other experts whose advice Doug has sought, including a leading forestry consultant, Guy Watt of John Clegg Consulting and Mark Prior of the Forestry Commission.

But DNPA does not agree. In a statement given to the Gazette setting out its position, it states: ’In the authority’s view, while it is desirable for timber to be stored under cover, it is not necessary… As such, it is not considered that the two buildings proposed are reasonably necessary for the purposes of forestry and that planning permission is therefore required for the buildings.’

When asked to explain why its conclusions differed so drastically from those of The Hillyfield’s advisors, and which experts it had consulted in order to form a view, DNPA said it could not comment further on an ongoing appeal. The authority was also unwilling to say how it would like to see the woodlands managed.

DNPA has now accepted the machinery barn is necessary for forestry – but not the drying shed that would go a long way to making the project finacially sustainable.

And Doug is in no doubt that what he calls ’a smokescreen’ is going on, with regard to the way the authority is handling his case.

He cites supporting documents from experts, and 180 letters of support from members of the public, that were not uploaded onto the authority’s planning pages when the application was lodged. The expert opinions are now available as part of the appeal documents, but the large number of letters remain nowhere to be seen.

Again, DNPA said it was unable to comment on this.

Doug and Claire are now asking people to get behind their campaign, to help them ’stand up and fight for our right to set up a small sustainable woodland project on Dartmoor, and to engage the community in the process’.

The Hillyfield has become an important part of the community, welcoming schools and students, as well as volunteers eager to learn and help the couple achieve their vision. Doug’s commitment and professional approach has won him the support of forestry professionals, and recognition in the area: in 2014 The Hillyfield won silver at Devon County Show for the best managed mixed objective woodland, 2nd only to the National Trust.

For more information, visit the website www.thehillyfield.co.uk which contains a link to the crowd funding page for the campaign, and other ways to support The Hillyfield.

The Hillyfield’s Crowdfunder appeal www.crowdfunder.co.uk/thehillyfield/ is going well, although there is a long way still to go. It currently stands at just short of £15,000 of the £35,000 needed to fight the planning case.

The date for the public inquiry has not yet been set, but looks likely to be in October or November this year.

Doug has offered his thanks to the community and local businesses for getting behind the appeal. He has events including The Great Celebration, and an auction of promises coming up to continue the fundraising push over the next few months.

Doug and his supporters are busy compiling the mountain of paperwork needed for the inquiry, preparations for which are taking almost all his time.

He asks anyone who would like to support the appeal to donate via the Crowdfunder page, where rewards can be found including early bird tickets to The Great Celebration.UPDATE: WITH just one week left, a fundraising campaign by The Hillyfield to support it's upcoming planning appeal still has a way to go.The Crowdfunder page www.crowdfunder.co.uk/thehillyfield/? has so far raised just over £21,000 of the £35,000 total needed.But Doug can point to growing support from senior voices in the forestry world, including Bishop of Liverpool James Jones, who chaired the Government's Independent Panel on Forestry that reported in 2012.The right reverend Jones wrote to offer his support to Doug, saying he was 'inspired by the initiative and the energy of the project' but 'appalled' at the opposition from the national park. This opposition, he said demonstrated 'how those in authority lose sight of the very values that they should be encouraging and protecting.'He continued: 'They should be working with you and not against you. 'And especially in the current climate when public resources will be increasingly hard to find those in authority should be championing local initiatives such as yours that mobilise the release of the wealth of time, energy and voluntary labour in local communities.'